Welcome to Kolu Houseboats for your Dream Stay

None less than the National Geographic Travelers have acclaimed Kashmir as one of the must-see paradises of the world. This narrow strip of land, blessed with abundant greenery, With innumerable attractions on hand - serene lakes, beckoning hill stations, exotic adventures, colorful festivals,, amazing heritage, tantalizing cuisine . you name it, she has it. Not for nothing is Kashmir one of the most sought-after destinations of the world.

By the memory lane, first Kolu House Boat was built in the year 1940 and ever since then we are pleased to be at your service. The name of our first house boat was Shellanne which was built by Mohammad Kolu in the year1940.Later on,in the year 1944, two more houseboats came in to operations which were supposed to be the very first special class houseboats in Dal Lake. These two special class house boats were built by a joint venture of four Kolu brothers and they were named as Shabash and New Shellanne respectively. The four brother's joint venture consisted of Ahmed Kolu, Jumma Kolu, Ghulam Qudir Kolu and Mohammad Ramzan Kolu.

It was in the year 1962, the very first Deluxe Luxury House boat was built in Dal lake which was named as Pride Of Kashmir which earned a lot of fame and is still a pride to the owners.

Kolu group of house boat is an epitome of the family bond and as a result the management through the years are been taken over by the following generations. At present we are proud of announcing the largest number of deluxe luxury house boats in Kashmir. The entire management is taken care of by the management of Kolu brother which is leaded by Nazir Ahmed Kolu and brothers. 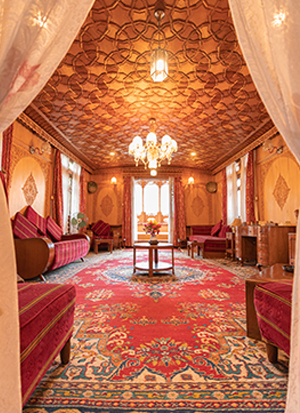 Our History of Houseboats

Pick a room that best suits your taste and budget

Houseboats were large barges used to carry goods. Traditionally, the houseboats were called Kettuvallams, which means a boat made by trying together pieces of wood. It is made of wood planks and coir rope and then coated with black resin made from boiled cashew nuts shells.

Houseboats of Kashmir are converted shikaras. Each houseboat is constructed using the ancient principles and techniques of boat building by the local carpenters using Anjali wood. Coir ropes are used for tying the wooden boards together. In the past shikaras were the major method of cargo transportation in the Kashmir.

Houseboats are olden day rice boats, which were used to carry the harvest from one part of the other place to go safely as eco friendly, no mechanized, centuries Shikaras have been roaming in the backwaters transporting men and materials to different destinations. Due to its sheer size and shape, Shikaras can carry heavy load. It was the important mode of transportation in Kashmir just because of its accessibility to the most remote areas. As time passed, the scene changed gradually. Motorized road, rail and air transportation scored over the slow and staid country boat, with people opting for speed over charm. During the time when road and rail transportation was expensive or unavailable, traders used this as a form of main transportation in the inland waterways. The boats had enough facilities for cooking and sleeping for the boatmen.

The Houseboats were also used for general transport purposes, primarily in the Travancore and Kochi regions. They were punted across the backwaters to the sea where the goods were offloaded. A trip from the Kuttanad to Cochin port was about three days of travel. A traditional boat might carry as much as 30 tons of goods which is the equivalent of three modern lorries. With the backwater area of Kerala so waterlogged, other forms of transport were both inefficient and difficult.

A houseboat is on an average 70 - 135 feet long boats with 15 - 22 feet width in the central section. They are made from wooden planks that are stitched together by coconut ropes. Interestingly, nails are not used at all in the construction of the Houseboats. Most of the houseboats are made from a wood known by the name of Anjili. Palm leaves tied over bamboo poles form the roof of these houseboats. Cashew Nut oil is used as a varnish to ensure a protection for the houseboats.

A holiday in one of Srinagar's hand-carved houseboats, moored on the lakeside against a dramatic backdrop of snow-capped Himalayan peaks, has long been regarded as a must-see essential of any Indian holiday. Its popularity soared after Monty Python star Michael Palin visited the houseboat where Ravi Shankar taught Beatle George Harrison to play the sitar for a BBC travel series.Throughout years of heavy fighting in Kashmir's militant insurgency, tourists have still flocked to Dal Lake to stay in a piece of living colonial history – many have wooden porches where guests can relax while gazing at breathtaking mountain vistas and listening to the calls of the fruit and vegetable-sellers from their floating 'shikara' shops, Kolu Group of Houseboats Welcomes you to Luxury Furnished Floating Villas in Kashmir.